All praises are due to Allah سبحانه وتعالى who allowed His servants to build a house of Allah instead of their own house. When the Prophet Muhammad ﷺ arrived in Medinah, the first thing he did was to establish a house for the worship of Allah before he built his own house. It should, therefore, be our main responsibility.

As Prophet Muhammad ﷺ instructed: build a masjid first wherever you live that you can worship in the house of Allah. He ﷺ said, “Those who build a Masjid (in this world), Allah will make a house for him in Jannah.” (Bukhari)

In accordance to the commandments of the Prophet Mohammad ﷺ, in 2001, we worked with fellow Muslims to establish a masjid in area of Lucan. We used to pray there 5 daily prayers, but no Jum’ua were performed there.

In 2002, we prayed with other community in a church in Lucan village for Jum’ua and Eid prayers. It was continued for about two years. Community people could not pray here due to long distance from the locality. At the same time we had to pray our daily prayers at 1A Woodford Rise, in Clondalkin.

In 2003, when we lost the above premises, we moved to pray at another location in Lucan village (31 The Park Grange Manor) for 5 daily prayer and taraweeh. Jum’ua and Eid prayers were still being performed in the Church.

2003 to 2008 we continued with this premises without any permission from the local authority. As a result of that South Dublin County Council closed this masjid. Then management committee of this masjid moved to Liffy Road in Lucan.

In 20 August 2009, CMC (Clondalkin Muslim Centre) registered and premises was rented for a Masjid in Clondalkin and continuing the Tafsirul Quran Mahfil until this year, under Clondalkin Mosque.

Unfortunatley, that premises had be abandoned due to an accidental fire. We have to leave behind the deposit and advance rent. Then we were praying in different places such as the houses of Brothers Iqbal Shohag, Saiful Islam, Azizur Rahman Masud, Khairullah and Ayub Ali. We also performed Jumua and Eid prayers in Knockmitten Community centre and Himalaya restaurant in rotation. At Knock Mitten youth Community Centre, praying Jum’ua and other Islamic activates were performed.

Alhmadulillah, finally, we got a 10-year-lease for 15 Naas Road Clondalkin Dublin 22. It was almost impossible to afford the high rent. Then we offer EU Money Transfer ltd. to sub-let part of our premises to run a shop; they agreed to take it. We received 10,000 euros as a rent in advance from EUMT. We registered under the name of Clondalkin Muslim Centre (CMC) on 20th August 2009 and held an opening ceremony; and formed a managing committee.

EUMT left the premises after few years due to business down-turn. They also left all of their furniture, fixtures and fittings, cold room, saw for fish etc. Then shop had been taken over by few community members for the best interest of the Masjid. Some shares were sold to raise funds. The enterprise, however, did not succeed. These people left the shop without giving any account.

In the mean time, we were continuously seeking to establish a permanent place for worship, which included the purchase of land or suitable building.

We found a land the size 6 acre and the price of which 600,000.00 euro. To raise the fund we intend to organize a fund raising programme on TV. We had faced few problems such as no charity number and that CMC was only known to local people.

An emergency meeting was held after Jum’ua with local Musalli and committee members. Decision taken were as follows:
In 2011, Dublin Welfare Society (DWS) was established.

In 2010, in order to buy a land at Cherbury Park Road, Lucan Village Dublin, we organize a fund rising programme in Channel ‘S’ Uk. We received pledges of up to the amount of 200,000 euro, and we collected over a period of time from one donor who paid his full promised amount of 65,000 euros. In addition, some other brothers and sisters donated a combined amount of 50,000 euros (approx.) over a period of time. We applied for planning permission but did not succeed, and as a result the remaining pledged amounts were not collected. (audited accounts are available upon request).

Then we called another meeting to discuss what to do next. Decision was made to buy a land anywhere in surrounding area of Dublin, for the benefit of the broader community.

In 2011, we had community election which divided our community in parts and as a result few community members withdrew their helping hand. DMC and CMC fell into financial crisis.

At the beginning of 2012, we reformed the managing committee. We further appointed an Imam to lead the prayer and run Quranic madrash for children.

There was not enough space for parking and also had no space for women. So we intended to rent another place above Aroma shop. The rent was 12,000 euro per year. Application was made for planning permission, architect’s fee was paid but South Dublin County Council did not approve the application due to some complaints against it.

In 2013, shop was closed down as no rent was coming in. Few regular donors were withdrawing their contributions as well; paying the rent was becoming very difficult.

We also received an enforcement notice from South Dublin County Council (SDCC) to close down our masjid due to parking problems. We appealed through solicitor to SDCC but no luck. Then we made an appeal to An Board Pleanala but result was same, also, advising us to move from the premises. We had to stop our activities in 15 Naas road to show respect the law of this country. We moved Jum’ua and Madrasha to neighbouring hotel IBIS.

In 2016, still we were in IBIS hotel for Jum’ua while South Dublin Maktab was used for men and women monthly halaqa. At the same time we kept looking for a suitable place.

The main purpose of setting up in Clondalkin is to support our community in terms of education, training, development and cultural activities.

Current activities at the centre include Arabic language and Quran classes for children and adults, halaqa and classes for ladies, children’s activities, community celebrations, small gatherings and festivities.

Our aim is to make this centre a hub for development of our community members as well as the wider Irish community through networking, training and development.

Eventually, we would also aim to facilitate integration, enterprise, social and business development.

Community members and members of the wider society are welcome to the centre.

We found another land in Clongriffin on the condition to buy 3 acre to get another 3 acre free. Total price was 2 million for the land. Early 2012, we were able to acquire an agreement to purchase the land (total area of 25,000 Sq.m) and build a mosque, school and community centre. This ambitious plan was put to the community and there was overwhelming support for the project.

We were embarking on one of the biggest Islamic project in Europe.

During an emegency meeting held in Clondalkin Muslim Centre, it was agreed to transfer 30,000 euros (in the presence of all the honourable advisors Dr Jinnuraine Jaigirdar andNasir Mozumder as well as the entire committee) from CMC account towards the Clongriffin Project. This would be seed money for the project.

We, therefore, pursued the project. Many meetings took place with architects, Dublin City Council planners, TDs, Councillors, evaluation surveyors, solicitors and many others.

Extensive consultations and Shura was also sought from the community in Dublin, Ireland, the UK and rest of the world. The feedback was overwhelmingly encouraging.

The project costs was overwhelming too. The architects fee alone was initially quoted to be 450,000 euros. This was negotiated down to 150,000 euros, thanks to Gerry Gannon, the landlord. We might have to pay the remaining 90,000 euros to the architect.

There were other aspects of the project including quanity survey, land and soil testing, etc. All these costs including land aquisition, construction and finishing amounted to an estimated 50 million euros.

The planning permission was the biggest obstacle to raising funds. We therefore decided to apply for it through our appointed architects.

By the grace of Allah (SWT), we got the planning permission. This was followed by intense fundraising, marketing and community development activities to raise the profile of the project that would in turn help in raising the amounts required for the project.

A small masjid was also established in the process (which is still running) and this masjid hosted a lot of activities including talks, Quran classes, halaqa, taraweeh, 5 daily prayers, Eid prayers and community events inlcuding conferences, Eid celebrations, lectures and get-togethers.

Fundraising proposals were made and the efforts included a variety of fundraising activies. We also approached international donors and the Islamic Development Bank in Jeddah through one of the steering committee members.

We provided the necessary documentation to qualify for assistance from the Islamic Development Bank, based in Jeddah, Saudi Arabia. Alhumdulillah, we were successful in qualifying for the funding. Representatives from the IDB visited Dublin twice.

We had intense discussions with the landlord and the Islamic Development Bank to facilitate funding for the project.

After coming to an agreement to lease the land so that we could begin fundraising for the project, we came up to a complete halt as we received a letter from the landlord’s solicitor stating that they would not be able to continue ahead with the project. This was in August 2014.

The properties were taken over by NAMA and therefore, the landlord and ourselves included lost all control over this project. Nevertheless, we approached the then Taoiseach Enda Kenny to help us resolve this situation. He promised to look into the matter and even wrote to us that he was referring the project to another department to look into our case. Eventually though, that also did not materialise.

The planning permission has expired and we will not be proceeding with this project.

The project had wide support from the community and had the potential of boosting economic, social and cultural activity in the area. 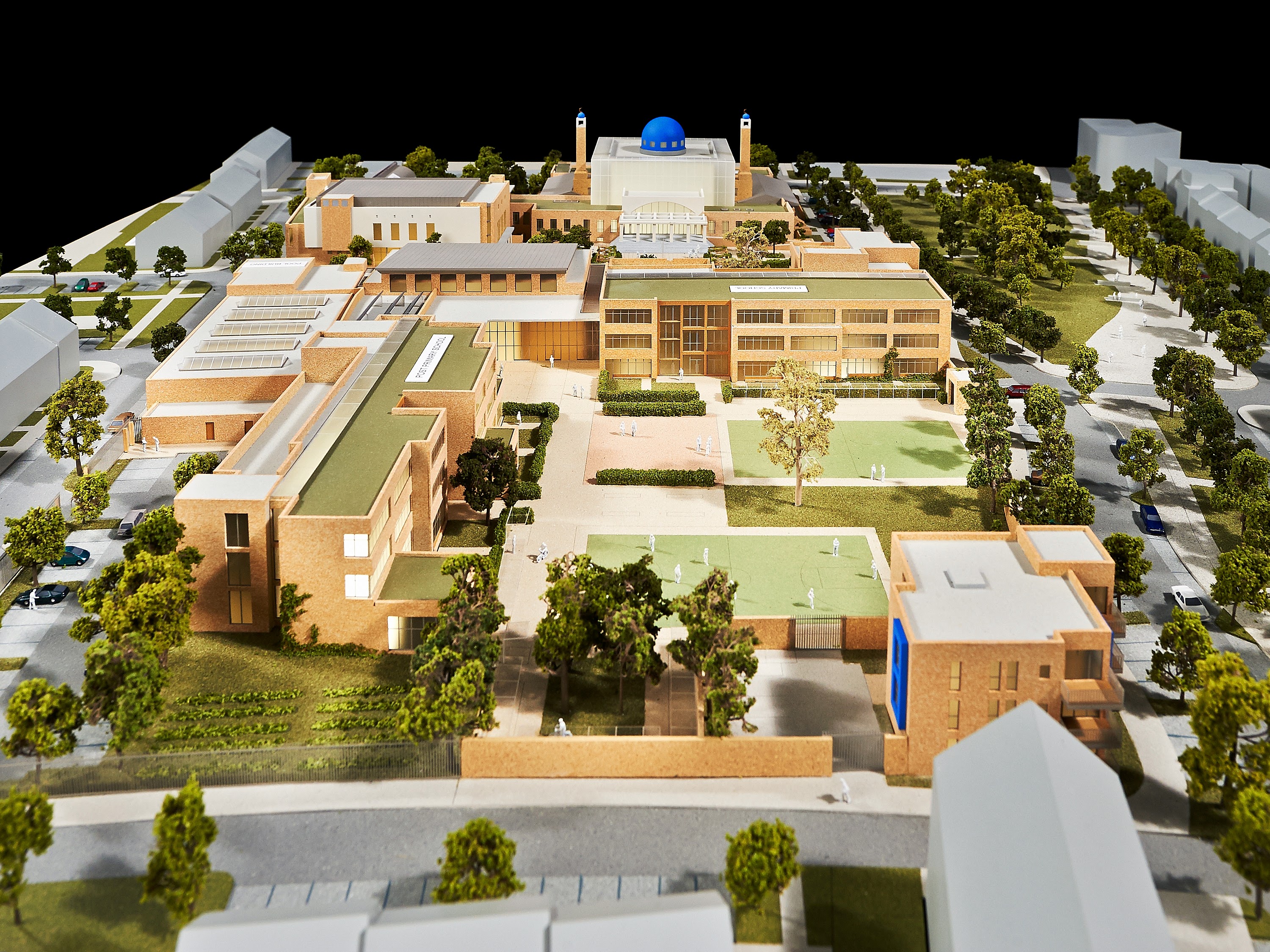 Call us for any query